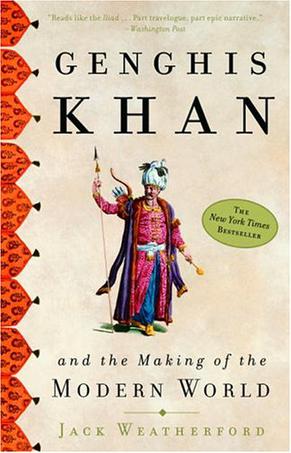 Genghis Khan and the Making of the Modern World

The Mongol army led by Genghis Khan subjugated more lands and people in twenty-?ve years than the Romans did in four hundred. In nearly every country the Mongols conquered, they brought an unprecedented rise in cultural communication, expanded trade, and a blossoming of civilization. Vastly more progressive than his European or Asian counterparts, Genghis Khan abolished torture, granted universal religious freedom, and smashed feudal systems of aristocratic privilege. From the story of his rise through the tribal culture to the explosion of civilization that the Mongol Empire unleashed, this brilliant work of revisionist history is nothing less than the epic story of how the modern world was made.

Jack McIver Weatherford is the former DeWitt Wallace Professor of anthropology at Macalester College in Minnesota. He is best known for his 2004 book, Genghis Khan and the Making of the Modern World. In 2006, he was awarded the Order of the Polar Star, Mongolia’s highest national honor for foreigners.

His books in the late 20th century on the influence of Native American cultures have been translated into numerous languages. In addition to publishing chapters and reviews in academic books and journals, Weatherford has published numerous articles in national newspapers to popularize his historic and anthropological coverage of Native American cultures, as well as the American political culture in Congress in the 20th century. He has become a frequent commentator on TV and radio.