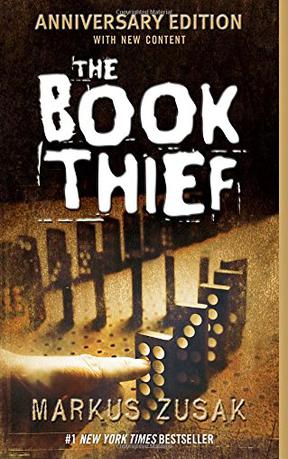 It’s just a small story really, about among other things: a girl, some words, an accordionist, some fanatical Germans, a Jewish fist-fighter, and quite a lot of thievery. . . .

Set during World War II in Germany, Markus Zusak’s groundbreaking new novel is the story of Liesel Meminger, a foster girl living outside of Munich. Liesel scratches out a meager existence for herself by stealing when she encounters something she can’t resist–books. With the help of her accordion-playing foster father, she learns to read and shares her stolen books with her neighbors during bombing raids as well as with the Jewish man hidden in her basement before he is marched to Dachau.

This is an unforgettable story about the ability of books to feed the soul.

From the Hardcover edition.

Markus Zusak is the author of five books, including the international bestseller, The Book Thief , which spent more than a decade on the New York Times bestseller list, and is translated into more than forty languages – establishing Zusak as one of the most successful authors to come out of Australia.

To date, Zusak has held the number one position at Amazon.com, Amazon.co.uk, the New York Times bestseller list, as well as in countries across South America, Europe and Asia.

His books, The Underdog, Fighting Ruben Wolfe, When Dogs Cry (also titled Getting the Girl ), The Messenger (or I am the Messenger ) and The Book Thief have been awarded numerous honours ranging from literary prizes to readers choice awards to prizes voted on by booksellers.

Zusak’s much-anticipated new novel, Bridge of Clay , is set for release in October 2018 in the USA, the UK and Australia, with foreign translations to follow.